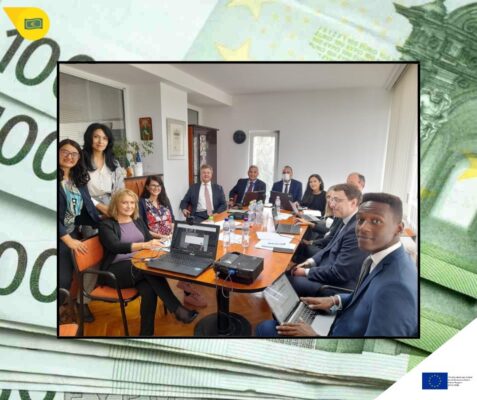 Project partners finally managed to meet in person for the second steering committee meeting, which was held in Sofia on 29th and 30th September. It was a two-day meeting, hosted by Women Lawyers’ Association. At least one representative per partner managed to be there. It has been important to have the chance to discuss in person on the performance on the project and to share information and ideas on the ongoing activities.

The first topic addressed was the selection of the participants. Each partner will select some trainees at national level, but some common guidelines are necessary. A common call for expression of interest also was discussed. Then, as for the online training, the videos prepared by the International Union of Notaries (UINL) were shown to the participants.

A report was also provided on the training of trainers organised in early September. Even if not all trainers managed to join, the willingness to cooperate of those who were present was remarkable. Afterwards, UINL and the Spanish General Council of Notaries (CGN) presented the progress done on the methodology and education materials, and the deliverables were validated by the partnership.

The policy statement on the role of legal professions in AML/CFT was on the agenda on the second day. Ceplis had prepared a draft statement and, following comments by the other partners, will revise it. In the end, partners shared some information on the 2022 training seminars. It was especially Federnotai, that will organise the first seminar in Italy in January 2022, that presented their progress on the venue as well as on the trainers and speakers.

Much more is yet to be done, as we approach to the heart of the project, which is the training phase, and will be tacked by the partners in the coming weeks.